The new issue of LingUU Journal is now published. It marks the 10th issue ever published by the journal, which celebrates its 5th anniversary this year. LingUU 6.1 features research articles from a wide range of linguistic topics, all written, reviewed, and edited by students. You can now read the full issue here, browse through the articles here, or buy a paper copy here.

In their paper, Liv Rendl explores the recent writing forms for gender-inclusion and gender-neutrality in the French language. The author presents the case for inclusive and neutral writing as a tool of embodiment, based on the works of Alpheratz and Greco. They illustrate the current state of the French language in terms of its lack of inclusivity and neutrality, and demonstrate how it may be developed with gender-inclusive and gender neutral writings. It is a very current and interesting case study due to the académie française consistently rejecting to accept these writings within the French language.

Carla Rijlaarsdam’s paper is an exploratory study which takes a closer look at annotator disagreements in the Stanford Natural Language Inference Corpus (SNLI), in order to investigate the process of human inference-making. By analysing and subsequently categorising the disagreements, it becomes possible to find explanations as to why they occur. These insights can then be used to train Natural Language Processing (NLP) models of any kind. Analysis and annotation of disagreement pairs result in observable patterns. This also helps the composition of annotation guidelines, which are then tested with volunteer super annotators. A second, more refined version of the guidelines is also proposed.

Mila Irmawati, Levi Remijnse, and Ayse Gunal use a Self-Paced Reading (SPR) Task to investigate the effect of cognates’ word class on the cognitive cost of code-switching. Successive Dutch-English bilinguals read sentences with switches from Dutch to English occuring after a cognate but within a single sentence. Their results show no facilitation effect of either nouns or verbs as cognates.

Joeri Vinke provides a simpler analysis that accounts for phonological processes in Dutch fricatives: final devoicing and no regressive voice assimilation. The author argues that a classical rule-based analysis that relies on an underlying voice distinction is not sufficient to describe the Dutch data. Relying on the distinction in length provides a more minimal account of the behaviour of Dutch fricatives.

Eleni Zimianiti proposes that semantic memory may play a mediating role in Accelerative Integrated Method (AIM), a pedagogical approach that emphasises language acquisition via embodied experience. She also discusses the implications of AIM.

In our third part of our Research Internships in Times of Global Pandemic series, three students report on their research internships. Eleni Zimianiti did her internship at the MPI for Psycholinguistics in Nijmegen, where she designed an experiment about statistical learning. Marijke van den Berg joined an interdisciplinary research project on language acquisition at UiL-OTS, studying the prosodic entrainment between mothers and 13-year-old children. Victoria Reshetnikova developed a statistical word segmentation model in Python, working on the interface of language acquisition and computational modelling.

The Daily Linguist features a collection of recommendations and links that are of interest to linguistics students, such as book recommendations, learning opportunities, and in this edition, linguistic games. 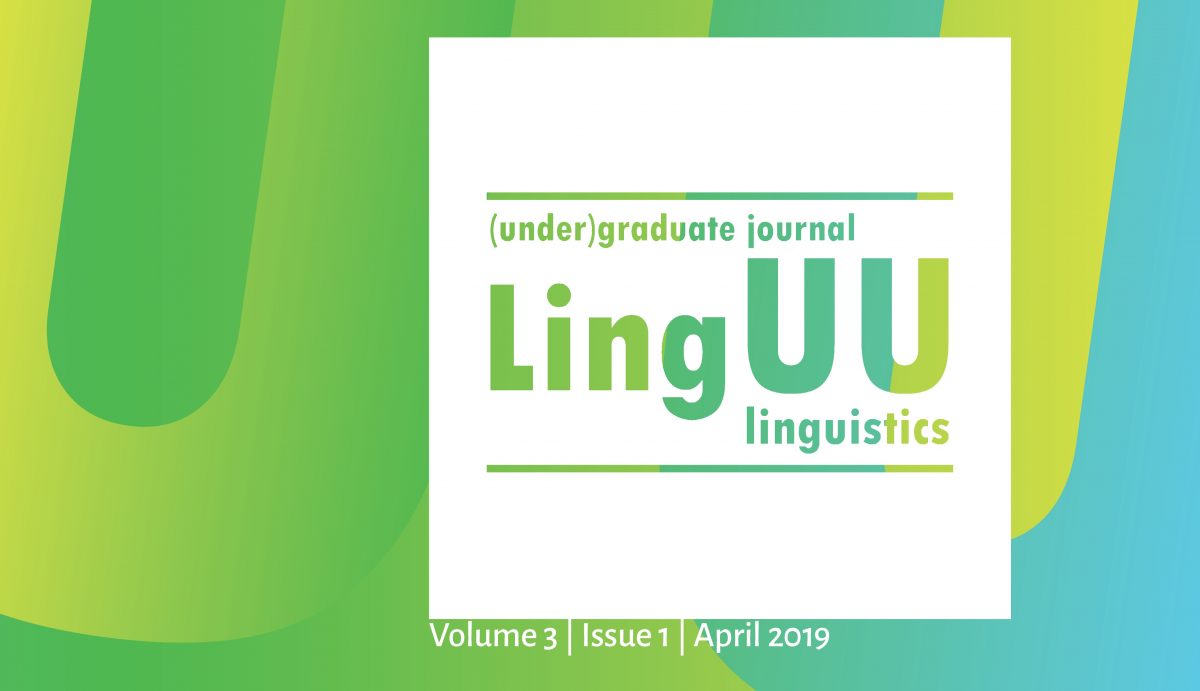 LingUU 3.1 is out now! The fourth issue of LingUU Journal features articles on various linguistic topics, written by students from different BA and MA programmes. Download the entire issue, browse through the contents, or order a paper copy (while supplies last).

Thanks to our authors, reviewers and advisory board, and special thanks to our founding mothers: Sophie Slaats and Fieneke Jochemsen!

Anouk Scheffer (RMA Linguistics) proposes a study on the effect of stress cues on mapping meaning to newly segmented words. This study focuses on monolingual and bilingual infants of 17 months old, learning both an iambic and trochaic language. Anouk suggests a way in which both word segmentation and the ability to map meaning to words can be examined.

Héloïse Pierret (RMA Linguistics) discusses the role of prosocial deception (‘white lies’) in maintaining a good communicative project. She argues that prosocial deception plays a role in manipulating and protecting the emotions of others. To visualize the role of deception in communication, Héloïse adapted the Affective Language Comprehension (ALC) model by Van Berkum (2018). She argues that a circular categorization should be used to classify deception types.

Japanese has emotions embedded at the core of its structure, in the shape of morphological elements. Damien Fleur’s (RMA Linguistics) paper reviews the literature on two such elements, namely the sentence-final particles ne and no. Through the prism of the Japanese society and with examples from Van Berkum’s ALC model (2018), this review investigates how these interactional particles ultimately perform in emotional communication.

Marjolein Talsma (RMA Linguistics) reports enthusiastically on her internship on the valency of weather verbs at her home-base, Utrecht University.

A little further away from home, Anique Schüller (RMA Linguistics) went on exchange to the Chinese University of Hong Kong to study cross-language activation in deaf bimodal bilinguals.

Roos Kerrebijn (BA Nederlandse Taal en Cultuur) writes about Het vermogen te verlangen by Liesbeth Koenen, which is a collection of interviews with renowned linguists about their work. Roos finds the book accessible and interesting for both linguists and a wider audience. 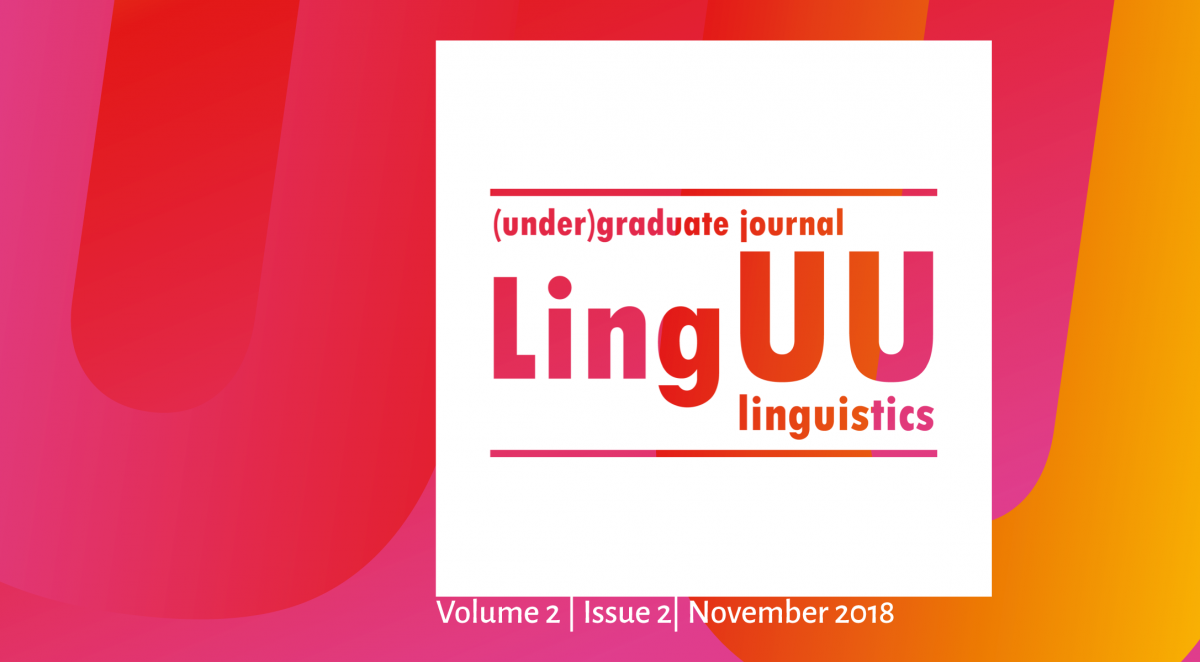 LingUU 2.2 is out now! The third issue of LingUU Journal features articles on various linguistic topics, written by students from different BA and MA programmes. Download the entire issue, browse through the contents, or order a paper copy (while supplies last).

Marlijne Boumeester (MSc Neuroscience and Cognition) proposes a study that questions bilingualism as a potential factor to delay age-related cognitive decline. She expects that the performance on the Simon task and the trail-making task will decline to the same extent in two age groups of monolinguals and bilinguals.

In a corpus study of Early Modern Dutch, Levi Remijnse (RMA Linguistics) analyses non-finite clauses headed by a present participle. Some constituents – prohibited from extraposition or raising – are located after this present participle. To account for this, Remijnse proposes that the present participle itself projects an extra projection containing a left-branching node (XP).

Bjorn Lichtenberg (BA Linguistics) reviews three models of force dynamicity. He compares their definition of force, their empirical coverage and their validity with respect to compositionality. According to Lichtenberg, Wolff’s model has the most expressional power, while the model by Copley and Harley is preferred in the light of compositionality.

Camilla Giannini (RMA Linguistics) investigates the the status of Occitan, a minority language in Italy, focusing on the development of this language, and on language planning and contemporary media as a way of maintenance. Giannini concludes that the desire of the speakers to promote their culture and traditions is still strong.

Jaap Kruijt (MSc Artificial Intelligence) reports on his time in Edinburgh. A course on language evolution countered ideas he had encountered before. Using a method that he learned about in Edinburgh, he wrote his thesis on this topic.

Walther Glödstaf (RMA Linguistics) finds that Steven Pinker’s The Stuff of Thought makes a convincing case for the use of semantics in understanding the human mind. He regrets the occasional oversimplificiations and straw mans, but appreciates Pinker’s witty display of knowledge. 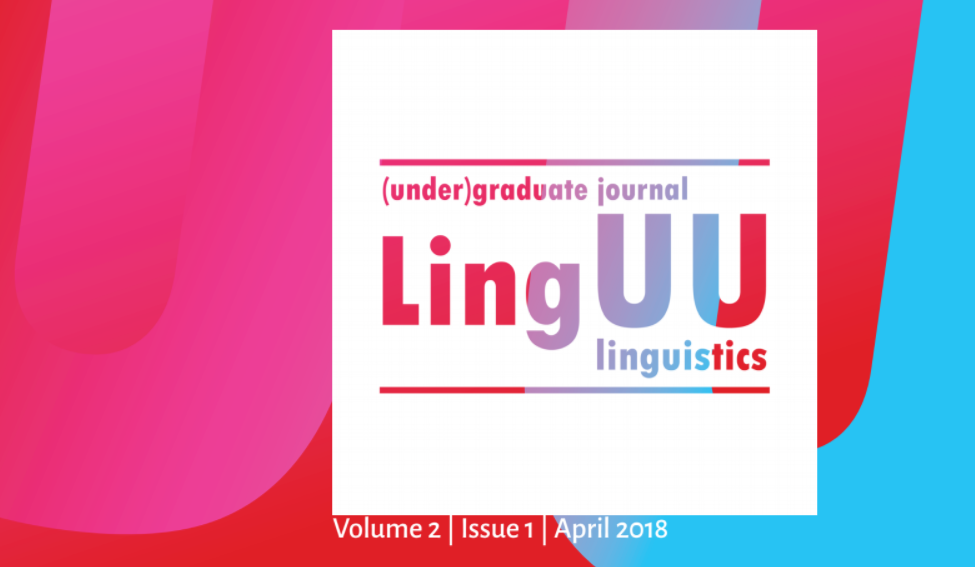 LingUU 2.1 is out now! The second issue of LingUU Journal features articles on various linguistic topics, written by students from different BA and MA programmes. Download the entire issue, browse through the contents, or order a paper copy (while supplies last).

Mattanja Blaauwendraad-Kalle (RMA Linguistics) takes off by proposing Feature-Based Verification to arrive at the right truth value judgements for reciprocals such as ‘date’ and ‘hug’.

In an experiment with French-Dutch bilinguals, Lex Tavenier (BA French language and culture, BA Linguistics) shows data that cannot be explained by the aspect hypothesis that L2-learners are sensitive to lexical aspect when acquiring a language’s tense system.

Sjoerd Bosma (BA Dutch language and culture) studies the conjunction al in Dutch dialects. He proposes to add a CondP and ConcP within the CP in order to account for the semantic differences between the conditional and concessive use of al.

Finally, Hannah Aalbers (paper during BA Dutch language and culture, now in RMA Linguistics) analyzes the non-configurationality of Dutch compared to the configural language of Bilinarra. She claims that even Dutch has flexible word order sometimes, and that pronominal clitics can replace constituents.

In two from abroads, Marlijne Boumeester and Sophie Slaats (both RMA Linguistics) report on their adventures. Marlijne prepared for her thesis in Oslo by researching adult bilinguals’ linguistic and cogitive abilities. Sophie sought neurolinguistic experience in Reading (UK) where she designed an EEG experiment in a project on L3 acquisition and language transfer.

Damien Fleur (RMA Linguistics) concludes the issue with a review of Robert C. Berwick and Noam Chomsky’s Why only us, which defends the claim that humans are unique in their linguistic abilities. Damien is disappointed by the “convenient ommissions of challenging evidence”, but he recommends reading the book nevertheless.